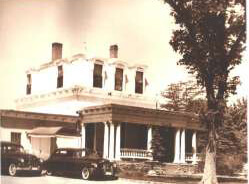 The original Gonzales Funeral Home was located on the northeast corner of the Old Town Plaza and Pablo Lopez and Fidel C. "Chief" Gonzales formed a partnership. Not long after, the partnership broke up and Fidel C. "Chief" Gonzales and his wife Jessie moved to 2315 Hot Springs Blvd about four blocks NW of the Plaza Hotel on Hot Springs Blvd. Fidel C. Gonzales, affectionately known as "Chief" was born in Aguilar, Colorado and was a member of the New Mexico Motor Patrol, a forerunner of the New Mexico State Police and he served one enlistment in the United States Army. he was active in San Miguel County Democratic Circles and served on the Board of County Commissioners, five terms in the New Mexico House of Representatives and was the first mayor of the consolidated City of Las Vegas. He died in Albuquerque, NM in 1990 at the age of 86.

He and his wife Jessie were married in Trinidad, Colorado in 1923 and shortly thereafter moved to Terrero, NM where they resided until 1933. They then moved to Las Vegas and she attended New Mexico Normal University, now New Mexico Highlands University. She was the Secretary of State for the State of New Mexico from 1939 until 1942 and then worked as a dietitian at the New Mexico State Hospital until 1956. One of the highlights of her public service career was when she was a White House guest of the first Lady, Eleanor Roosevelt. Mrs. Roosevelt described Mrs. Gonzales in her weekly newspaper column as a "beautiful black-haired, brown eyed, charming lady from New Mexico." She died in Albuquerque, NM in 1986 at the age of 82.

In 1972 the Gonzales family sold out their interest the Rogers brothers: Alfred, Leroy, and Billy Rogers. Leroy C. Rogers died in 1991 and Alfred Rogers Jr. died in 1997 leaving Billy Rogers as the sole owner of Gonzales Funerals & Cremations. In 1999 Billy married Brenda Montano LeFebre and they own and operate the funeral home.

If you have any questions please feel free to contact us.

What Makes Us Unique

Our Story
What Makes Us Unique
Our Affiliations
What's New?
Our Staff

A year of daily grief support

Our support in your time of need does not end after the funeral services.  Enter your email below to receive a grief support message from us each day for a year.  You can unsubscribe at any time.